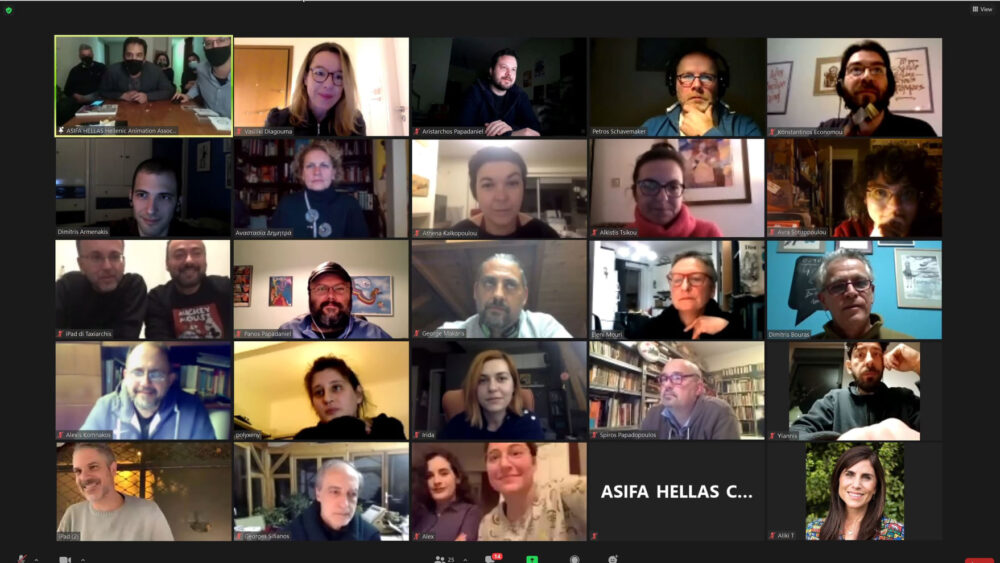 The board of directors, the members and the collaborators of ASIFA HELLAS-Hellenic Animation Association welcomed the new year with the annual cutting of the pie, as well as the awarding of the “Stratos Stasinos” awards for the best professional and student animation film of the year, in honor of the pioneer of Greek animation Stratos Stasinos. The zoom event was also attended by the representatives of the official supporters of the Union: Vasiliki Diagouma, Head of Communication and International Relations of EKOME (National Center for Audiovisual and Communication) and Athena Kalkopoulou, Director of Promotion of Hellas Film and representative of the Greek Film Center.

Recent important actions were discussed and mentioned at the event, such as the Greek participation in the Annecy International Festival, the financing of 25 short films by the Greek Film Center and the Ministry of Culture, initiatives that were introduced to combat the pandemic, and the renewal of the Greek Film Center funding regulations. The student award “Stratos Stasinos” was won by Dimitris Armenakis for his graduation film from the Royal College of Art “All You Can Eat (2019)”, which has traveled and honored with distinction to more than 40 international festivals, while the award for best professional film was won by George Kontos and his film “Sevarambes” (2020, 11΄), a production of Marni Films, produced by Mina Dreki and Phaedra Vokali.

The year 2020 had many actions by the Association, being a year of celebration as 75 years have passed since the creation of the first Greek animation film by Stamatis Polenakis “Duche narrates”. Some of the most important actions were the series of digital screenings and the round table “Production & creation of custom animation films”, edited by Fokion Xenos, in October 2020 for the World Animation Day and in December 2020, as well as the creation of four episodes of the series “Digital portraits” (2020), produced by ASIFA HELLAS (Vassilis Karamitsanis), directed by George Gavalos and edited by Anna Kourela. Also, in the framework of the Extroversion Action “Greece Animated 2020”, two cycles of seminars and a digital discussion were organized, the first cycle regarding creative practice and the second business issues of production development and animation financing.

The Association continues to promote Greek animation in Greece and abroad, aiming to further edit special programs and anthologies as well as more film screenings in 2021. As in all these years, the creation of a large family of Greek animation is encouraged, based on the constant exchange of ideas and support between creators, old and new.